Funen is the smaller of the two main Danish islands. Its pastoral outlook and laidback fishing villages along the coast draw many visitors, but the key attraction is Odense, Denmark’s third city and the birthplace of writer Hans Christian Andersen and composer Carl Nielsen.

Named after Odin, chief of the pagan gods, ODENSE (pronounced Own-suh) is well over a thousand years old. An attractive little place, with a lush location on the River Odense Å, it has an engaging cultural scene and a surprisingly energetic nightlife with a focus on live music: it’s one of Denmark’s most enchanting places to spend a few days.

South of the centre at Sejerskovvej 20 is Den Fynske Landsby (Funen Village; March–June & mid-Aug to late Oct Tues–Sun 10am–5pm; July to mid-Aug daily 10am–6pm; 60kr, June–Aug 85kr), a living, breathing nineteenth-century village made up of buildings brought here from all over Funen, including a windmill and a school. In summer, free shows are staged at the open-air theatre. Buses #110 and #111 run to the village from the bus station.

It’s infinitely better, however, to walk to the museum by following the river south about 4km via the ornamental park of Munke Mose. Boats also run there hourly (80kr return) via Odense Zoo (daily from 9am, closing time between 4 and 7pm, depending on day and season; Dec closes 2pm; March–Oct open till 10pm some Sat; 150–190kr), which has Northern Europe’s largest exclusively African safari park.

The city’s (perhaps the country’s) best attraction is the H.C. Andersens Hus at Bangs Boder 29 (June–Aug daily 10am–5pm; Sept–May Tues–Sun 10am–4pm; 95kr), where the writer was born in 1805. The museum includes a library of Andersen’s works and audio recordings of some of his best-known fairytales read by the likes of Sir Laurence Olivier. There’s also intriguing paraphernalia including school reports, manuscripts, paper cuttings and drawings from his travels. The most striking feature, aside from the diminutive house itself, is the series of murals by Niels Larsen Stevns (1930) depicting different stages of Andersen’s life. Check out the telling quotes on Andersen’s unconventional looks and talent: “He is the most hideous man you could find but has a poetic childish mind”, commented one contemporary. Down the road, at Munkemøllestræde 3–5, is the tiny H. C. AndersensBarndomshjem (Childhood Home; June–Aug daily 10am–5pm; Sept–May Tues–Sun 11am–4pm; 30kr), where the writer lived between the ages of 2 and 14.

Just off Vestergade, west of the centre, is the Brandts Arts Complex. Once a large textile mill, the area has been spectacularly converted into an art school, cinema, music library and three museums (Tues, Wed & Fri–Sun 10am–5pm, Thurs noon–9pm; 80kr combined ticket; Wbrandts.dk). In the large hall that once housed the huge machinery is the Kunsthallen, which displays works by the cream of new talent in art and design, and the Museet for Fotokunst, featuring changing photography exhibitions. On the third floor the DanmarksMediemuseum chronicles the development of printing, bookbinding and illustrating from the Middle Ages to the present day. to the present day. There is another branch of Brandts at Jernbanegade 13 (Brandts 13; same opening hours) focusing on late nineteenth-century Danish art including stirring works by Vilhelm Hammershøi and Skagen artist P.S. Krøyer.

The Rough Guide to Denmark and related travel guides

The Rough Guide to Denmark 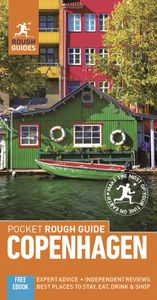 Your travel guide to Denmark

Ready to travel and discover Denmark?
Get support from our local experts for
stress-free planning & worry-free travels